It is here! It is DONE! It is Playable!
http://gambit.mit.edu/loadgame/summer2009/camaquen/camaquen_play.php 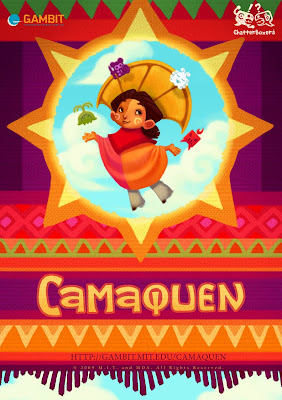 CAMAQUEN
This is the game I spent my summer working on. All of the concept art on this page or the property of the Singapore MIT Gambit Game Lab. 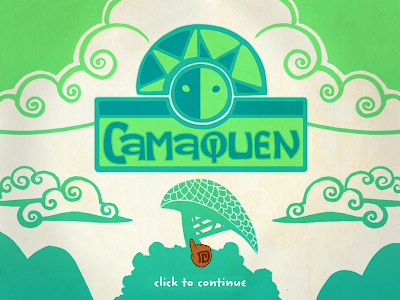 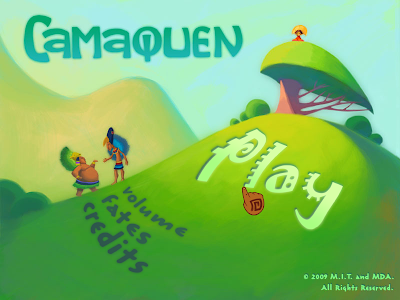 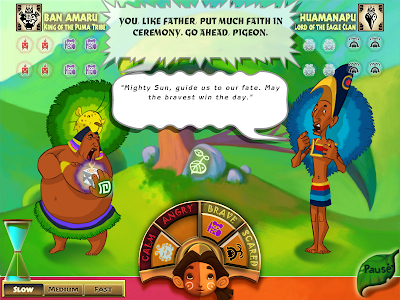 The game was produced in order to help explore Conversation in Game, and although it can be confusing to play through I ask you all to Play It! I did most of the painterly illustration work while my co-artist, QX specialized in the more graphic elements.
This summer I met Color, and we had a dazzling encounter. I stopped using line work  for a while simply because I was in love with Color. I gave Line a very needed vacation sent him to Hawaii. I've been reintroducing Line slowly. I'm hoping we all get along.
I spent forever designing our little goddess, Alux (pronounced A-loo-sh, but no one really knows that). 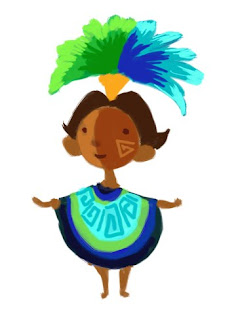 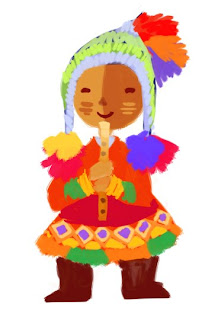 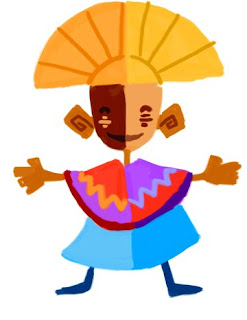 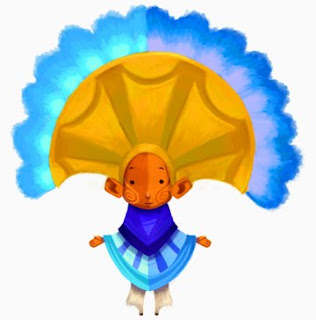 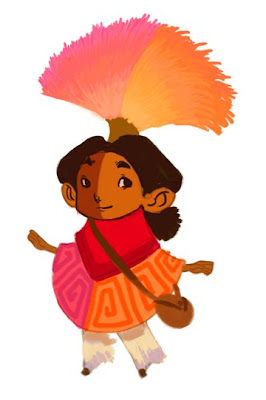 This was the basic final design for Alux.
Five other games were produced this summer,
all awesome and note-worthy @
http://gambit.mit.edu/
At the end of our summer the whole art gang got together to produce our All-Stars poster. We each did a character from a different team.  I miss all you guys! I'll visit Singapore as soon as I can! :) 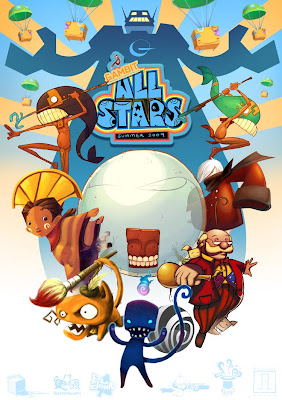 Most Enthusiastically!
Fabi
Posted by -fabi- at 3:24 PM 3 comments: 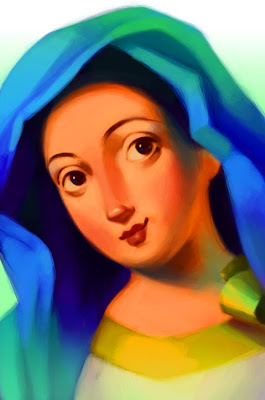 For Christmas my dad asked me to "reproduce" the image of the Blessed Virgin that is native of Leon, Mexico (where my mother's family grew up), so it can be given out as a present to all my aunts and uncles.

I wanted to do my own take on it, while respecting the original painting.
Posted by -fabi- at 5:56 PM 3 comments:

I've got one week left of freedom. Just one. My family has been spoiling me to absolute bits. I start my job at 38 Studios next Monday. It will be filled with Maya and Ultimate Frisbee. I took a few Maya tutorials before I left Gambit and it's software, and here in Texas I've been practicing my frisbee toss. I was terrible at it. I looked up instructions on 'How to Throw a Frisbee' in secret.


I also took on a freelance job, and here is my due for this week. 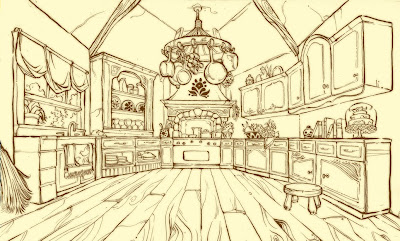 You'll be seeing kitchens for a while.

My sister and I watched the entire series of Ashita No Nadja (59 episodes) in two weeks. We take in absurd amounts of anime ever vacation. I'm a little miffed by the ending... 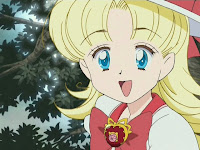 Nadja
I'm also playing Rhapsody: A Musical Adventure on my new DS. It's been dangerously addicting. You go on a musical quest to win the Prince's heart and save his life! :D I think I'm playing moderately all things considered. 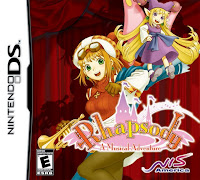 Don't tell Lauren!
But I made this for her. I'm pretty sure she never looks at my blog so it's safe.
The colors still look to dark and intense on screen. I'll try to fix it. 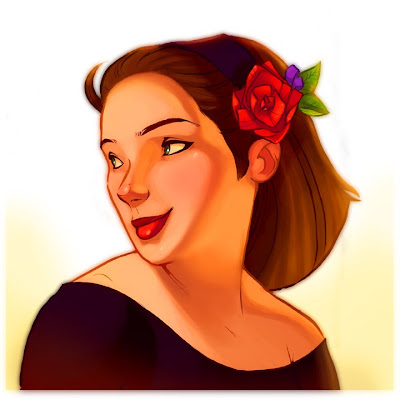 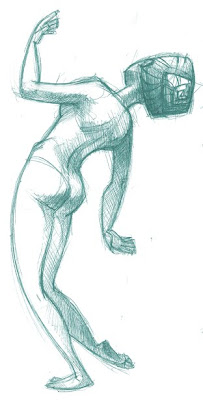 Today I went to the NASA Space Center AND saw a mini-exibit of props used in Star Wars, Willow and other Spielberg enterprises. Helmet Heaven.

Also, I drew this fly for freelance purposes. 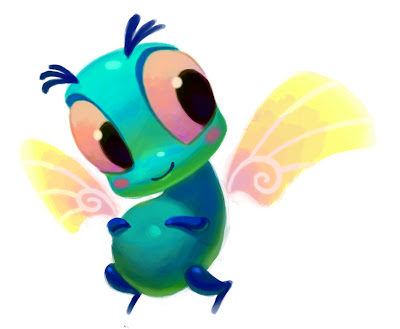 Fishy in the Sea

I've indulged in movie watching. First order of the day was going to see Ponyo with my little sister. When I came out of the theatre I was a little jarred since it was an insanely visually rich film. It was like a child's dream and as such the moments didn't always make sense together, but individually were magical. The more I think of it the more I am dumb-founded at Miyazaki's ability to understand children. It baffles me. I actually had to step back to understand in what world this story worked. To my embarrassment I realized it was the world I often attempt to capture: a child's. Admittedly, Miyazaki is usually an aquired taste for me, which means I have to see his films a number of times before I fully get it. Ponyo has so many layers I think I hardly licked the surface. Perhaps it's only because I had a professor in college who is crazy about symbolism, but I would kill to know what everything in Ponyo means or represents.
Actual crtiques? Like I said sometimes the story didn't flow incredibly well, and so I thought for moments that I was bored, and really I just have to forget that in order for children to go on adventures they can't always be SAFE and DRY. I nearly choked when I saw the mother taking Sosuke in the car during the storm. I thought, "Lady, leave your kid with the old ladies!" You really know you're getting old when you start thinking those things during an animated movie where you're practically assured the main character, who is five is not going to DIE. 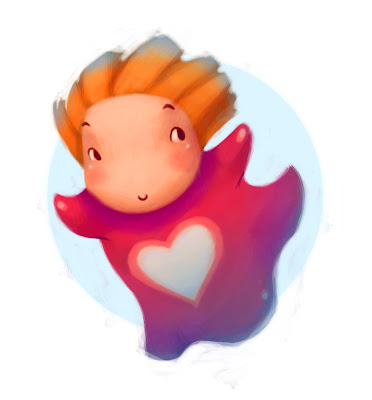 Other than Ponyo I've watched:

17 Again- For anyone who can't quite admit they're attracted to Zach Efron, but want an excuse to look at him anyways. Not bad, actually.

Sister Act- Always a popular choice in my household. Musical fun AND nuns, what more could I ask for?

Mr. Magorium's Wonder Emporium- When I dream of being a character Natalie Portman has played, it's usually the role she plays in this one. She's bright, funny, momentarily insecure, and gets to work in a magical toy store. Watch it with your brothers and sisters, or alone if lonely.

On the Art front, I managed to get this little painting out today. I'm having terrible trouble actually drawing. It's like my hand refuses to remember what things look like. It's because I've been painting, isn't it? 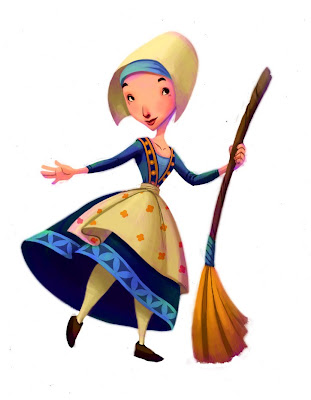 This is my last week at Gambit. Dommage! I don't like the idea of leaving one bit, but I am glad that in as little as two weeks all of the games the teams have worked on this summer will be going live! I'll finally be able to show some of the concept art I've been doing.
Other than that I visited my best friend from high school, Claire or Cal, in New York City! My camera is still currently with her so I don't have any pictures to show yet. I did buy a HUGE pillow at ABC Carpet & Home, the most beautiful home store I've ever seen. 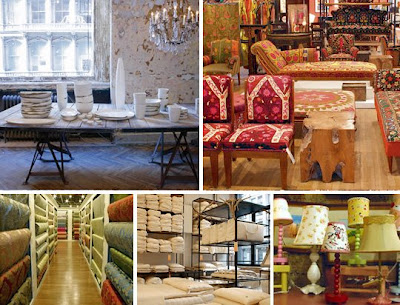 http://www.abchome.com
Also, a slightly more affordable store worth going to is Ten Thousand Villages. Where I bought this pillow. 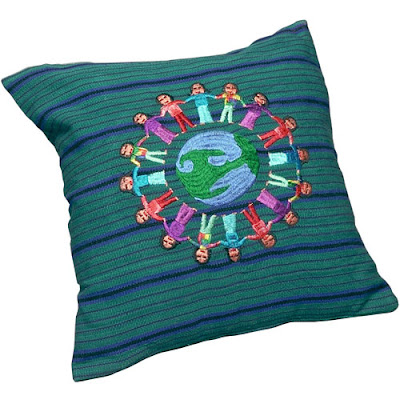 http://www.tenthousandvillages.com
Artistically, I'm still pretty tied up here at Gambit until the game is released, but I did manage to do another character portrait inspired by the same adventure series. I'm actually really hoping to get the books, even if I can't illustrate them. 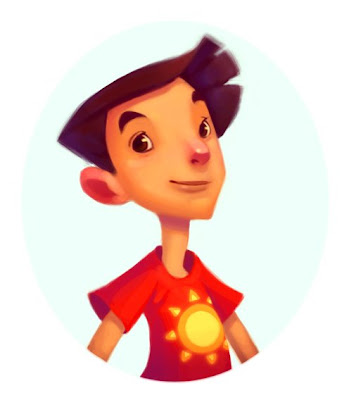