Ignitum Today: The Flowers of Surrender 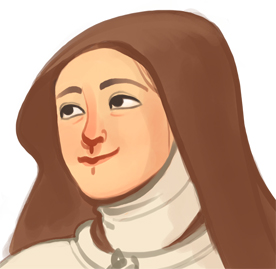 As some of you know St. Therese’s Feast day is today. St. Therese, known as the Little Flower was known for a simple life lived with great love and her promise to “spend heaven doing good on earth” and “let fall a shower of roses”. I’ve always had an interesting relationship with her and her spirituality. And I know why, because her spirituality involves being overlooked and humble and misunderstood and taking it for the love of God. My pride has yet to get to a place where I want to be like that. And I know I have to be the saint I’m called to be, not St. Therese but there was something that made me want to take her up again, at this time as a prayer partner and intercessor and I didn’t even know exactly why, but she did and here is the story so far...
Posted by -fabi- at 10:11 PM No comments:

How fantastic was last week's second reading? The emphasis is mine, but go ahead and do yourself a favor and read it and then read it again and then take it line by line and just sit.

Beloved:
Where jealousy and selfish ambition exist,
there is disorder and every foul practice.
But the wisdom from above is first of all pure,
then peaceable, gentle, compliant,
full of mercy and good fruits,
without inconstancy or insincerity.
And the fruit of righteousness is sown in peace
for those who cultivate peace.

Where do the wars
and where do the conflicts among you come from?
Is it not from your passions
that make war within your members?
You covet but do not possess.
You kill and envy but you cannot obtain;
you fight and wage war.
You do not possess because you do not ask.You ask but do not receive,
because you ask wrongly, to spend it on your passions.

This is another beautiful passage that I found a when I was in Florida.

Take off the garment of your sorrow and affliction, O Jerusalem,
and put on for ever the beauty of the glory of God.
Put on the robe of righteousness that comes from God;
put on the diadem of the glory of the Everlasting;
for God will show your splendor everywhere under heaven.
For God will give you evermore the name,
'Righteous Peace, Godly Glory'.


I got invited to go to a Chesterton Society thingy by my friend M. So far she said it's just been her with some guys exchanging good quotes rather loudly at a pub. I'm in. I'll even drink the the beer. 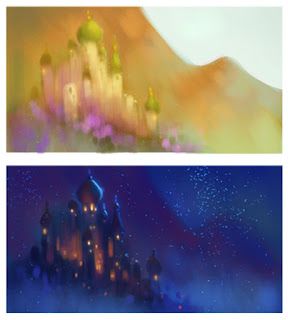 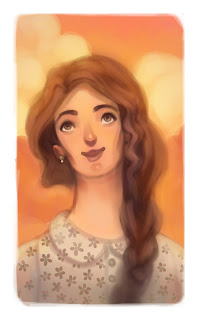 A girl with a thick neck we shall call Anne! 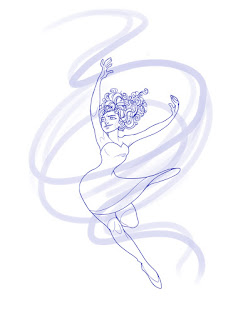 Me as a hero-girl-waterbender complete with hero body!

A black and white study I did for the 'Twelve Months' project.

I think I peed my pants when I watched these two thing in a row. How can these things be happening all at once? IMPOSSIBLE POSSIBLE.

I'm learning this dance for a Flash Mob in Providence and it is sooo cool it involves SPIRIT FINGERS and I'm so excited like 12 year old.

Please pray for me over the weekend and especially on Monday. A lot of things go down on Monday. There might be crying or laughing or slumping of shoulders.

My little sister is over the moon about this. Her name is Sofia and she has brown hair and she wears purple. :)

Catching Fire is filming in Atlanta!! Double reason to visit my parents!

I listened to Fulton Sheen's autobiography a second time so I thought I'd post some of his most famous quotes because I love him. 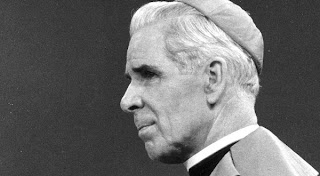 “It takes three to make love, not two: you, your spouse, and God. Without God people only succeed in bringing out the worst in one another. Lovers who have nothing else to do but love each other soon find there is nothing else. Without a central loyalty life is unfinished.” ― Fulton J. Sheen, Seven Words of Jesus and Mary: Lessons from Cana and Calvary 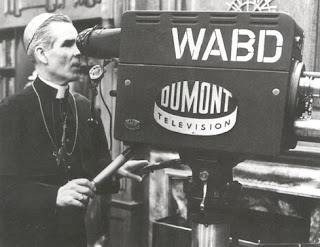 “To tell a woman who is forty, "You look like sixteen," is boloney. The blarney way of saying it is
'Tell me how old you are, I should like to know at what age women are the most beautiful.'” ― Fulton J. Sheen 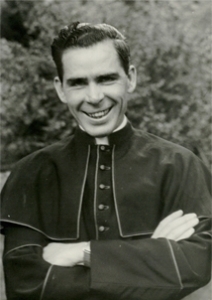 “A woman gets angry when a man denies his faults, because she knew them all along. His lying mocks her affection; it is the deceit that angers her more than the faults.” ― Fulton J. Sheen, Life is Worth Living 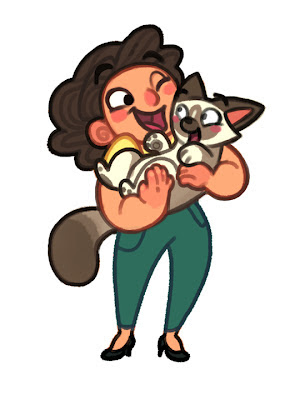 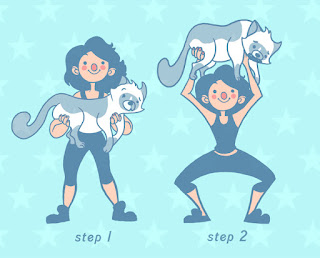 A Mural in the Land of the Color Coral

Florida is pink; coral, salmon, flamingo. I thought the proliferation of those colors, coupled with baby blue and rubber ducky yellow, were left in the memories of those who decorated their homes in the 80s. Now I know where those colors retired.... Florida. Apparently, pinks don't get their pigment sucked out by the the sun, so everyone paints large buildings pinky shades down there.


But St. Joseph's Church in St. Petersburg is cream and honey inside, and it was there that I spent a few days painting something nice up for a couple arches. They're very simple, but I had a lovely time getting over my fear of tall ladders. 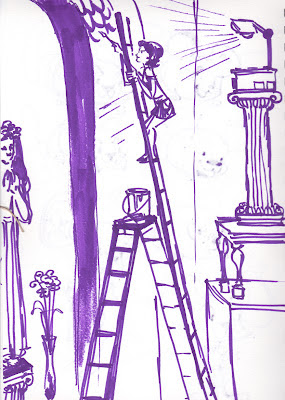 The ladder was so heavy I didn't even help move it. When I tried to help it almost crushed me... for real. 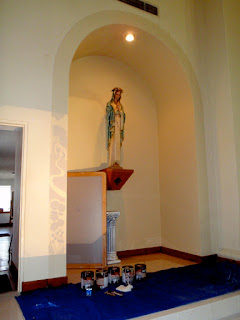 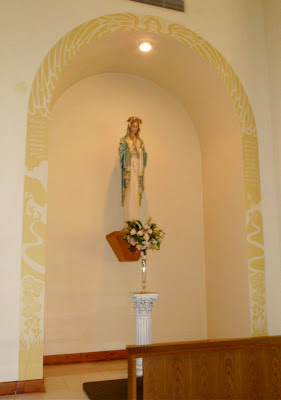 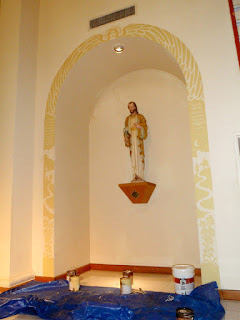 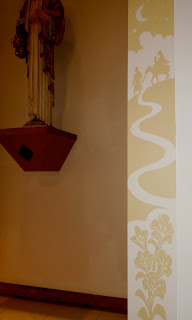 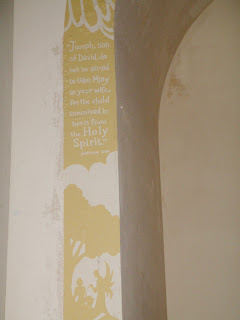 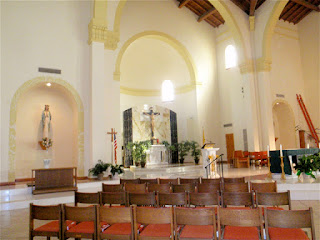 See the ladder way on the right? My best friend for the weekend.

Thank you for visiting.
Love, Fabi
Posted by -fabi- at 9:37 PM No comments: