My heart is bursting with joy! How I wish I was with my family and friends as I watched our new pope come out on the balcony!

I can't believe they made a decision so fast, I hadn't even really planned on watching for smoke for the first couple of days, and to think I nearly missed it. I was out on a lunch date when my phone stated beeping and my facebook wall was inundated.

I found a live stream and sat on my bed... waiting.

When the cardinal announced his name I thought, who? Francis? What? Explain!!!!

And finally the curtains opened and a bespectacled figure appeared. I didn't recognize him. I thought I had done my research pretty thoroughly, but if he wasn't a likely candidate in the eyes of the press then that was probably a good thing! He stood there, not smiling, and I thought, smile! Please be a kind man. And then he began to speak and all my doubts were washed away by the gentleness of his voice. When he asked the people to pray for him and he went on his knees, I sobbed and prayed that the Lord would give him strength and wisdom and that He would keep him safe from the snares of the Devil. I prayed that he would be Jesus Christ's instrument for peace and unity in the world and I cried through all the pain and joys that have come with leading a Christian life. Pope Francis said goodnight and left too soon, I wanted him to stay. I wanted to be there. 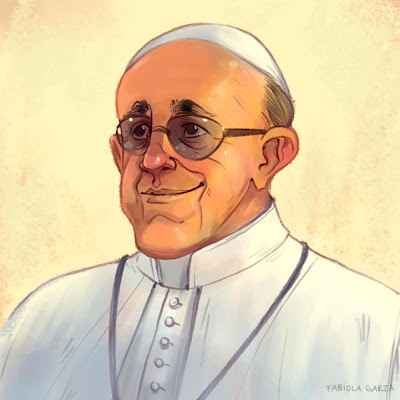 The only things I've learned about him so far are that his fellow cardinals believe him to be a living saint, that in Argentina he does not live in the "Bishop's Palace" but in a small apartment, he cooks his own meals and takes the bus to work. He is known for his simplicity. I hope the Lord grants him sanctity and strength, because this office is heavy and the need of the world so great. May Jesus Christ reign in his heart and may he feel loved by the people who already love him so much.

~
St. Francis heard the voice of the Lord saying, "Francis, rebuild my Church."
Posted by -fabi- at 2:18 PM

Wow, Fabi. What a wonderful witness.

Hi Fabiola. I luvvvv your artwork..You are very Talented & Amazing :-) God Bless your beautiful soul...Can I share your artwork of Pope Francis in my FB pls :)