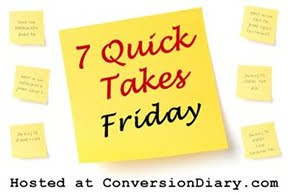 -1-
I seriously considered not writing this entry since I've been very internety the last week which I attribute from internet withdrawal once in Spain, but it can't be that since I didn't really miss it. It must be because while I am home I am just too horrifyingly interested in finding fun things that are just as fun as Spain. Or maybe it's because I have all these things I said I would do online.

-2-
One said thing is writing about WYD which is a bigger task than I though since there are some photos I'm still waiting for and because the trip was so freaking packed. But I will have that done at some point.

-3-
The second said thing was writing an article for VirtuousPla.net . A bunch of young adult catholic bloggers where invited to contribute stuff. You can find my first entry Advice to Singletons here. Somebody got a little upset about it and I apologize I meant it to be mostly funny and to the point, but compassionate too. Maybe I should stick to art.

-4-
This really beautiful movie from Studio Ghibli is coming out soon take a look at the trailer!

-5-
Here is a quote from Chesterton for the week:

They knew much better than we do what was the matter with them and what sort of demons at once tempted and tormented them; and they wrote across that great space of history the text; "This sort goeth not out but by prayer and fasting."

-Excerpt from St. Francis of Assisi on the Christians that had lived the culture of the Roman empire and were soon to begin living the Middle Ages. Emphasis by me. 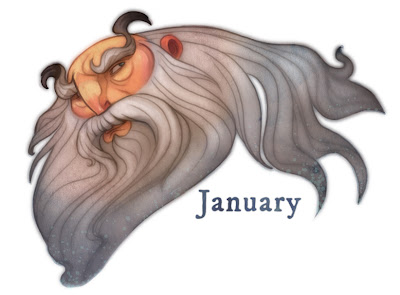 It's January, the wise month that my character Lucia encounters on a winter night.

-7-
I just got a bible on my iPod. Best thing to do. I can no longer make the excuse, "but it doesn't fit in my cute purse!" But I do have to strain my eyes a bit. I think I will fall into the the kindle hole soon and just collect beautiful old editions and art books.

I really liked your post on Virtuous Pla.net. It was nicely written and there was some good advice. Don't worry about that person, I guess she's just going through a rough time.
By the way, I love your drawing of January!

Arrietty is actually out already! And while I was in Japan, Miyazaki's son Goro just released a new film with Ghibli called "Kokuriko-zaka Kara" (From Kokuriko Hill), which is a romantic period piece. :)

And I LOVE reading your entries about Spain!

Is it out in the states yet? :D Yay! I'm so glad you enjoyed the entries! I'll try to get a new one done this weekend.

Beautiful blog.I read your post about the World Youth Day
I'm sorry for my English, I'm spanish, born in Cordoba,but I live in Barcelona.Greetings

The more art I find of yours the more I want.

And your "Luci" character is awesome, especially since she has the name of my daughter...

When I get loads of money one day I am going to commission loads of art from you!