Well, my work for the day got cancelled—thank you for your steadfast ways gaming industry—so before I go do anything else useful with my day I figured I'd chat up the blogosphere.

This has been a crazy, beautiful amazing month. Thank you St. Joseph for your powerful intercession, you seem to be following me around even if I don't ask you to pray for me. I finally discovered where on earth my father got the idea that my name, Fabiola, means "offering to God". For the life of me throughout the years I've gone on all the "meanings of names" websites and the definition is always the same: bean, bean picker, fava bean... just beans. I always thought my dad was just trying to make me feel better, you know beans could be offered up to God or something.

So yesterday, I was looking up the feast of St. Joseph, which is March 19 and I know this well because it is my sister's birthday, but I wanted to see if I could find another day when he might be celebrated. There weren't any other feast days dedicated to him so I just scrolled down the Wiki page and I came upon how his feast day is celebrated in different countries. The first and most prominent party for good old St. Joseph happens in Sicily.

St. Joseph is considered by many to be the Patron Saint of Sicily for preventing a famine during the middle ages. "According to legend, there was a severe drought at the time, and the people prayed for their patron saint to bring them rain. They promised that if he answered their prayers, they would prepare a large feast in his honor. The rain did come, and the people of Sicily prepared a large banquet."

Now for the weird part people.

"The fava bean was the crop which saved the population from starvation, it grows well even in poor, rocky soil, and is a traditional part of St. Joseph altars and traditions."

So yes, the story is slightly idolatrous but still pretty cool.

And just to take the point home.

"In Roman times, the fava bean was considered food for the poor, used mainly as an offering to commemorate the dead on the first day of November. The name of an ancient Roman family the Fabi, comes from fava bean, as do the common names Fabio, Fabia and Fabiola." (source)

So thank you St. Joseph for your prayers. Thank you for being there for me when Disney said no, so I could work on Lolek, and for the brilliant young man working at one of the schools under your patronage. I like him very much too. So I really do hope I get to glorify God with my life and offer myself completely to him, in thanksgiving for everything that he has done for me.
~

I drew this wee picture of Mary last week. Enjoy! 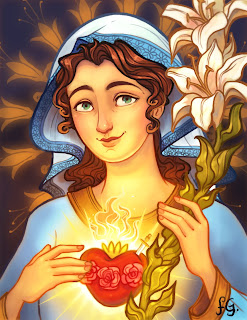 Have a happy July!

This is one of the many reasons I love Saint Joseph!

I'm so glad you're enjoying new job. Glad to see the update!

Also, I don't mean to pick a fight, but shouldn't you be thanking God, not St. Joseph? After all, God has all power and control, right, whereas Joseph was just another human who had faith in God, and therefore is in heaven with Him? That's my understanding anyway.

Glorious Saint Joseph, model of all who are devoted to labor, obtain for me the grace to work in the spirit of responding to the love our Lord is graciously giving me; to work conscientiously by placing love of duty above my weaknesses; to gratefully and joyously deem it an honor to employ and to develop by labor the gifts I am receiving from God, to work methodically, peacefully, and in moderation and patience, without ever shrinking from it through weariness or difficulty to work; above all, with purity of intention and unselfishness, having unceasingly before my eyes that my passage on hearth is short, and thus, I should fully dedicate to God the time and talents that He is giving me.

Intercede for me so I can obtain the grace to do good wherever and whenever I can; not to foolishly fall into vain complacency in success; to always seek to glorify God through my humble work.

All for Jesus, all through Mary, all imitating you, o patriarch Saint Joseph!

Hello Anonymous! Thank you for stopping by!

If you noticed at the end of my blog entry I said, "So I really do hope I get to glorify God with my life and offer myself completely to him, in thanksgiving for everything that he has done for me." So I do indeed thank God for EVERYTHING. He is the source of all grace and blessings.

I thank St. Joseph for praying and interceding on my behalf as any friend would do. The difference between my friends on earth who pray for me and the saints in heaven who also do is that the saints in heaven have been sanctified and are in the presence of the beatific vision and so are completely aligned with God's Will, making them perfect prayer partners. If I can thank my Mom profusely for the many prayers she has said on my behalf I can certainly thank the saints in heaven who understand infinitely more what I need to be more perfectly conformed to Jesus Christ, our Lord and Savior.
God Bless!

Hi Fabi, thanks for responding. Your answer made sense to me. And I'm so glad that God (through Saint Paul) assured us that Jesus Christ Himself "always lives to make intercession for [us]." (Hebrews 7:25)
I really enjoy your blog, both the art and your personal thoughts.
~S