Today I awoke to a number of texts informing me that Pope Benedict XVI was renouncing his office as Bishop of Rome. I don't think I was as surprised as I should have been. I was grieved and happy for him. When I read his address giving his reasons for leaving the love I have for him increased, and I knew this decision, forged in the depths of prayer, was the right one. I don't know exactly why, that remains to be seen, but I meditated why this uncommon choice felt right to me.

I read one blog post where the author felt jilted by Benedict, and wondered how he could leave office after Pope John Paul II lived out the remains of his papacy completely handicapped. BXVI is not JPII. JPII's charisma, character and in your face holiness allowed his time of illness to be a period of intense inspiration for the body of believers. There was immense fruit from his witness. I believe BXVI was humble enough to realize that his aging body would not become the same kind of symbol, even if his mind remains agile.

I don't believe he made this decision out of selfishness, I truly believe he felt that calling in his heart from our Lord to open the path for another successor, because in the end The Church will bear much fruit despite the commotion. Holy Spirit enlighten and guide us! 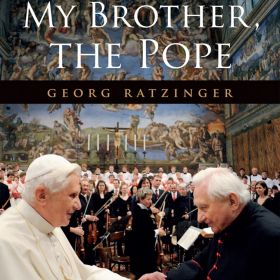 I think I've found one of my books for Lent!
~

The hardest thing today has been reading the unkind tweets or updates geared at My Papa, for he is Papa still. There have been plenty of bad popes. He was not only not bad, but deeply holy and brilliant.