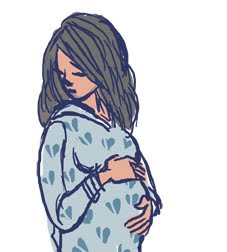 I really enjoyed this entry! Thank you for sharing your thoughts, I think it's very interesting and important to talk about!

You would make a good nun. Seriously.

Thanks very much for sharing this, Fabi!

As one who went to the March for Life in Washington D.C., I really thank you for pressing the importance of love.

Just yesterday, I was praying the rosary in front of the abortion clinic in our town with my sister and mother and another friend. We prayed earnestly, and in full knowledge of what sort of things happened inside that clinic, as well as having personal experience with it. I now ask my little nephew/niece for prayers from heaven. My brother who accompanied his girlfriend to the clinic over 15 years ago has no job/income/appt. of his own and still lives with my parents due to the ptsd/depression gained from that one experience. Being only eighteen, I have a CONSIDERABLE heavy place in my heart regarding this issue.

Anyway, when I was praying the rosary yesterday, I thought momentarily of puting a note on the door saying something like "May God love and protect you and your loved ones. Please, close the clinic." I realize now that it sounds somewhat criptic and lame, but ... If only people acted in loved for those in need half as much as they worried about them, we'd have few problems in the world!

Thank you for posting, and I'll read that prolife website. God Bless

Very well written. I agree a lot with your conclusion that we (society) need to take care of these troubled women instead of condemning them.

I'd consider myself to be pro-choice (not pro-abortion, if that makes any sense to you) and the big problem I see is that most women who do get an abortion don't really have a choice. There rests a lot of pressure on a woman's shoulders and it doesn't get any easier for her when the baby is born. It bothers me a lot that those pro-life people with their t-shirts and signs apparently fail to ask themselves: What happens to these children after they are born? Who is caring for them? Under which conditions would they have to grow up? I'd say these are the kind of questions that scare those women and society needs to find an answer if they want to ease the social pressure that motivates so many of them to terminate their pregnancy.

There is another side of abortion that most don't talk about, though "Benedict Girl" hints at it.

For the woman having the abortion...she has stopped a hormonal process mid-way. This causes a chemical reaction similar to post-partum blues. She eventually has to deal with these strong hormones that can cause deep depression. It may be delayed for reasons I don't understand.

I had a friend, a grown woman who went through such a deep depression due to the abortion and the hormones that she became suicidal. She had not been raised particularly religious, so I don't think she was carrying any spiritual guilt that would also come from such an experience.

It has taken her years to heal from this.
And I believe it's a miracle that she's even alive today and sharing life with her husband and the children she does have.

I wish that Planned Parenthood would be honest with the women they counsel and explain the physical/chemical side of this issue as well.

And I wish that all of us could grasp the idea of Christ's love as you have in this Fabi.

If we are willing to point a finger...are we willing to love them and in so doing bring them into a better place a little further down the path?

May God help us to love.

Thanks for sharing your heart, honestly, openly and without condemnation. Hugs. TCK